Purpose and Uses of Modem: A Complete Guide 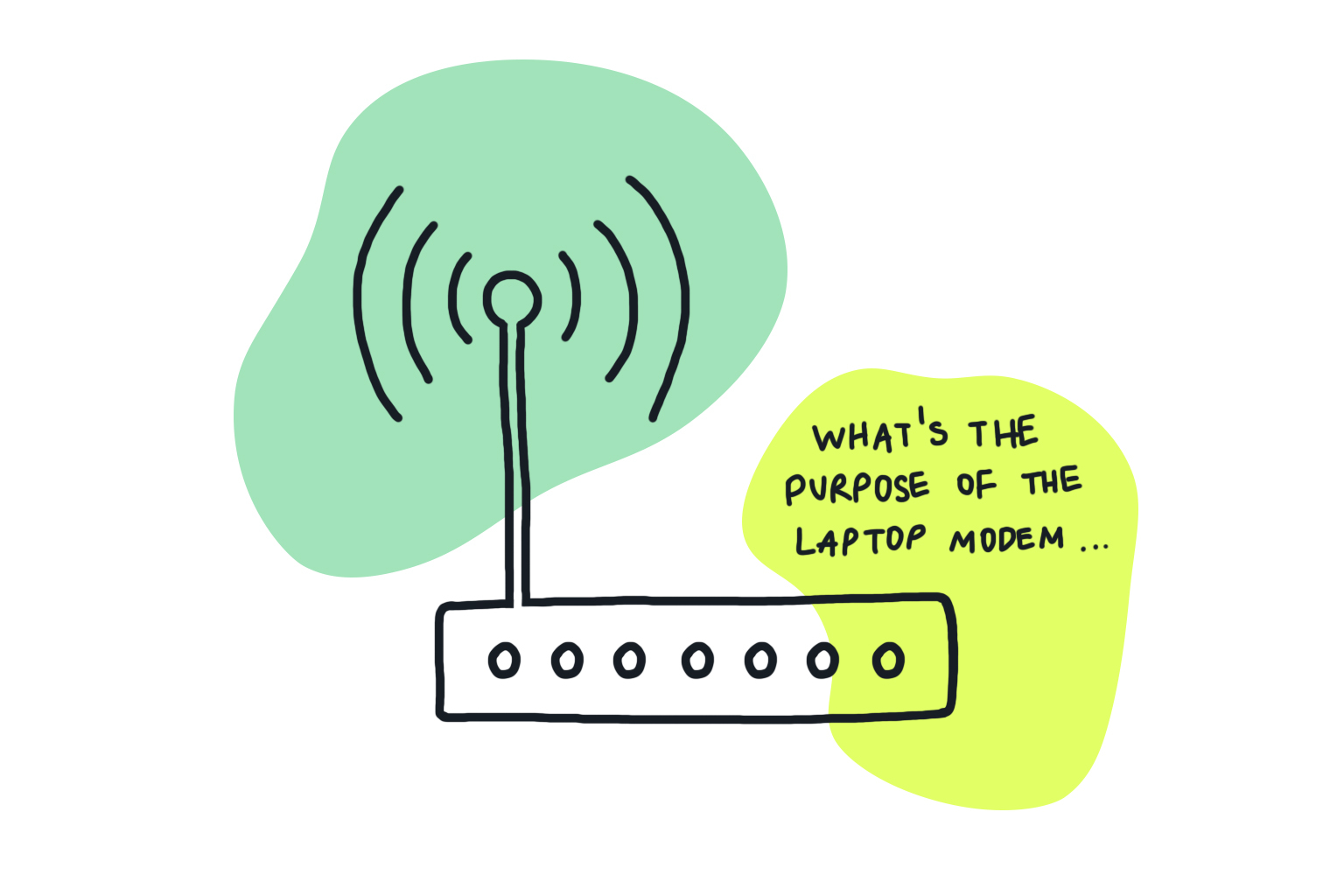 Innovation inevitably shapes the way we perceive the world. Occasionally, technology gets so famous that its name becomes eponymous. This is the case with a modem – the word that is applied to literally any device related to Internet connection. While it reflects a purpose of modem, it may be confusing for those trying to choose a device for travel or remote work.

This article is an attempt to sort out the most common misconceptions and highlight the milestones in the evolution of the technology.

The development of modems is as rich as the evolution of the Internet itself, which is perhaps one of the reasons the term is often misused. So, understanding what modems are and what purpose they serve requires a bit of unpacking. Let’s skim over some of the key points.

How Does a Modem Work?

In the simplest terms, a modem converts digital data into signals that can be sent over the network, or converts them back to data once they arrive. This process is known as modulation, hence the full name of the device, “modulator-demodulator.”

Unlike your trusty USB cable, which can transfer data pretty much directly, the majority of Internet relies on a vast communication infrastructure which uses its own transmission format. In other words, the purpose of modem is to be a translator between two mediums.

In the first consumer-level Internet, telephone lines were used for connectivity. They were not exactly a perfect fit for the job but allowed using an existing infrastructure, which was a huge boost for the ISP market pioneers. So, first modems modulated the data into essentially a phone signal. Modern USB WiFi modems use wireless communication, so they convert data to radio signals instead.

As mentioned earlier, modems play a major role in the development of the Internet as we know it, becoming something of a cultural trope in the process (more on that later). In broad strokes, the entire history of the technology can be divided into pre- and post-telephone periods. Devices from the first era – things like dial-up and DSL modems – were bulky pieces of hardware remembered mostly as boxes with blinking lights that made strange noises. By today’s standards, these modems were painfully slow – with a typical data plan at the time, you’d have to wait for several hours to watch an average Youtube video.

The second period started with the introduction of broadband – which, as the name suggests, improved connection speeds dramatically. Devices from this era, like an Internet modem with WiFi or a less common satellite modem, are still very much around. These communicate with the network using radio signals, which offer a number of Internet benefits. They are much smaller and sometimes come embedded inside devices like phones, and work faster and more efficiently. Really, the only drawback is the lack of a distinctive sound to be nostalgic about once they are gone. So the purpose of modem stayed the same – it just became less noticeable.

As one might expect, modems come in many shapes and forms. Some have become the stuff of history, while others remain relevant today. Depending on how modems work, they can be:

The first two are basically legacy technology by now, and the last one is mainly used by ISPs. The other three options are still very much in use, with each required for its delivery method.

Another popular classification divides the modems into internal and external. The former means that a modem is placed inside the device – either by being hard-wired into its motherboard or inserted into a slot within. Phones, tablets, and some laptops come equipped with internal radio modems. The second category covers gadgets that can be connected to the device externally. USB modems would probably be the most familiar example nowadays, although there were many earlier attempts to offer on the go Internet for laptops like the PCMCIA slots.

Do Modems Have WiFi?

The short answer is “not necessarily,” although many modern devices come equipped with both modems and the WiFi routers. The confusion here stems from the liberal use of the term “modem.” In the early days of the Internet, each device served a specific function, like modulating the signal or sharing the connection. As the technology matured, ISPs switched to equipment that performed several functions. By this time, the term “modem” became so firmly associated with Internet connection that it became eponymous. Consumer-grade solutions also started to include both a router and a modem, further blurring the line between the two.

In this light, modems and WiFi functionality are orthogonal – these are separate categories. Nevertheless, for a portable WiFi device for travel, it actually makes sense to combine these functions. So, a modern portable modem will have WiFi connectivity you might turn on when necessary, combining the best from both worlds.

Also read: Modem vs Hotspot: Everything You Need to Know Before Making a Choice

As mentioned above, modems are routinely integrated into many portable devices like phones and tablets. In contrast, laptops with embedded modems are quite rare. There are several reasons for this:

Nevertheless, there are good reasons to have a separate device for Internet connection. For starters, it will be nice during business trips. While some tasks can be accomplished via a phone, certain professional software for desktops relies on online connectivity to function properly. Mobile tethering can solve this issue, yet there are limits on what can be accomplished with it, especially during travel.

Because of this, portable WiFi for laptop has recently gained popularity. The main market is professionals who travel a lot and look for the best pocket WiFi to power their workstation. However, with prices of modem going down with each generation, they’ve become an affordable option for smart home networks that combine simplicity with convenience.

Connect Laptop Directly to Modem vs Through a Router

To be clear, the advantages of WiFi connectivity do not end with portability – at least, for earlier types of modems. As explained above, the purpose of modem is to connect the device to the Internet, while WiFi is only needed to share the connection and eliminate the pesky wires. This means that for a setup with one laptop you could connect it directly to a modem.

However, this method entails its own set of risks. A direct connection means that your data is only as secure as your laptop. Whatever flaw you might have in your setup may be discovered and exploited. From this standpoint, a router, which is a standalone device, adds an extra layer of protection.

All of the above holds true only for legacy modems that are hard to come by nowadays. A modern internet modem with WiFi will have routing functionality, so plugging it into a laptop is not exactly a direct Internet connection. On top of that, some portable modems, such as nect MODEM,  come equipped with useful security features like built-in VPN support. With this equipment, direct connection is as convenient as it is safe.

As technology changes the way we live, portable solutions find more and more applications that make our life easier, safer, and more enjoyable. Modems are not an exception, with new market opportunities emerging regularly.

The most obvious reason to buy a portable connectivity device is travel. The biggest barriers to international access are posed by regional providers, which either restrict access to certain resources or make them prohibitively expensive. Nowadays, the most advanced devices will have a selection of plans to choose from and switch when necessary, making them a perfect WiFi for international travel.

2.  Internet for Business Use

As more jobs move online, the possibility to work from anywhere becomes less of a luxury and more of an essential quality-of-life option. Some opt for it to maximize their productivity while others favor it as a lifestyle choice. In any case, a portable Internet modem is indispensable for businesses and professionals that value flexibility. And, with 5G promising to supersede cable Internet speeds, questions like “What Internet speeds do I need for Zoom?” may well become things of the past.

Online gaming is among the most demanding activities in terms of connection speed and reliability. For this reason, mobile data plans were not really an option for most of their existence. Now, with portable Internet for laptop gradually outpacing its cable counterpart, it is not uncommon for people to use portable modems for their gaming laptops. At the very least, it is a viable backup plan for scenarios where a local ISP lets you down minutes before an important tournament.

With the abundance of Internet media services and increasingly affordable data plans, media consumption moves online steadily. In fact, the phenomenon has become noticeable enough to get itself a name. In this light, a portable WiFi for laptop not only grants you access to your favorite content from everywhere but can also be used to set up the network for powering home media devices.

Modems have gone a long way from bulky and noisy pieces of hardware to integral components of consumer-grade gadgets. The lines between them and related equipment like routers have become blurry, with modern mobile modems offering a variety of connectivity, quality-of-life, and security features. Nevertheless, their original purpose – connecting everyone into one huge network – can still be traced in the eponymous use of the term – something worth remembering once in a while.